The stone and the bear

A life-size stone bear welcomes residence owners and their guests in the entrance hall.

In the Casa Burés entrance hall, a stone bear welcomes residence owners and their guests, and scares away intruders.

The life-size sculpture of a bear standing on its hind legs at the foot of the staircase certainly can’t be missed. This imposing sculpture was created by the Modernist artist Joan Carreras, whose work can be found at the National Art Museum of Catalonia (MNAC).

This craftsman was a renowned sculptor and carver, and a key collaborator of Gaspar Homar, considered one of the Catalan Modernist movement’s most prominent furniture designers and decorators. 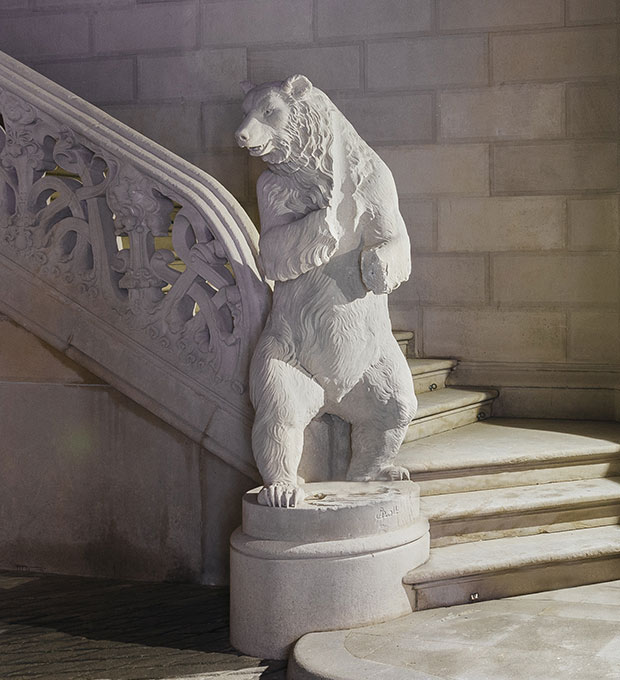 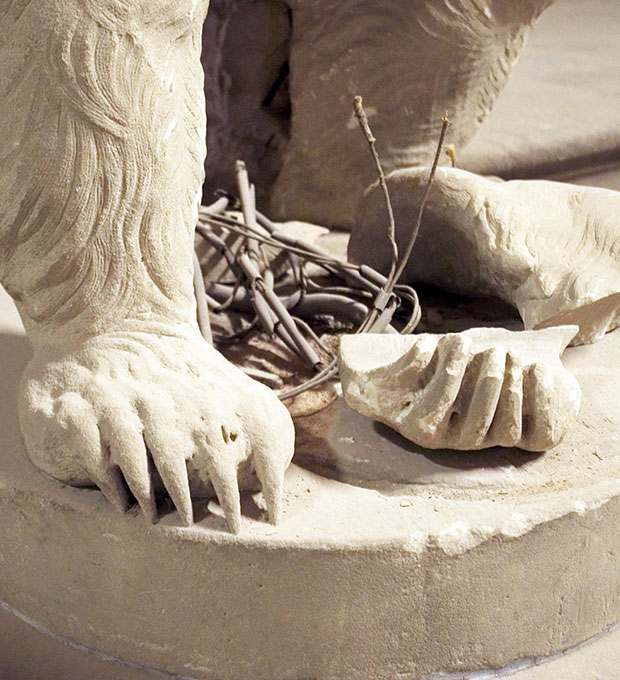 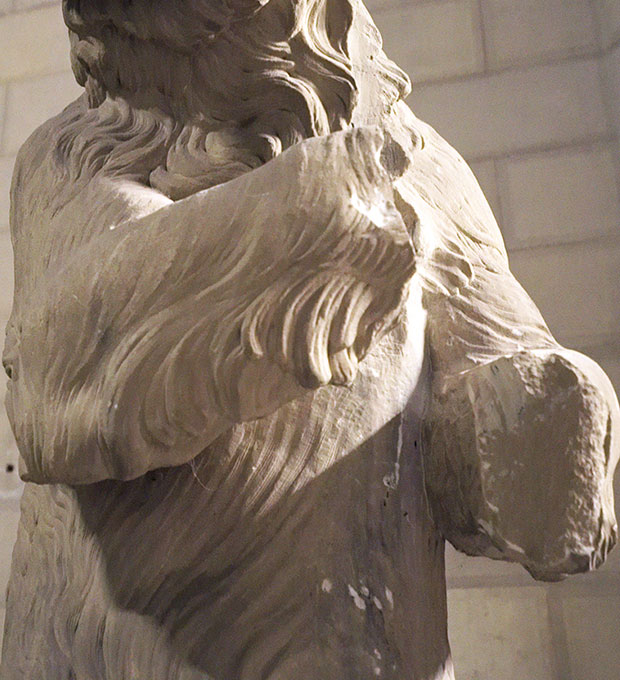 It was quite common for Modernist buildings to be decorated with floral and animal ornamentation in an attempt to bring a touch of nature to urban homes. Also featured were decorative elements depicting pets, such as dogs and cats, and wildlife from nearby forests, such as squirrels and reptiles. However, sculptures of bears, especially of this size, were not common.

The bear in Casa Burés has managed to stand the test of time and survive a Civil War. However, it could not defend itself from vandalism. Some years ago, thieves cut off its front paws to steal the lamp it was proudly holding. The lamp has unfortunately been lost forever, and was by the most prestigious artistic foundry of the modernist era, Marlera i Campins SA. 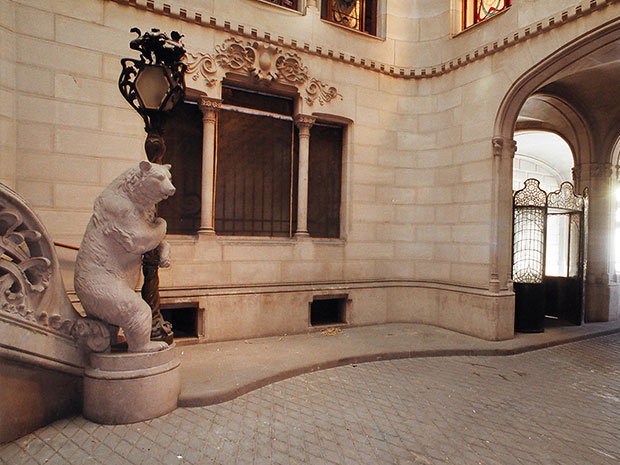 Restoration of the bear

The sculpture is made of Vinaixa stone, a type of limestone from the Tàrrega region of Lleida province

As a first step towards the bear´s restoration, a geology laboratory was commissioned to analyse the stone. The experts confirmed that the sculpture is made of Vinaixa stone, a type of limestone from the Tàrrega region of Lleida Province. Though the stone is still being used today, it was more popular during the Modernist period, as it was easy to sculpt and carve.

The geologists’ analysis also showed that the stone had been treated with wax to protect it and give it a better finish.

The bear is not the only feature in Casa Burés made of this type of stone. It was also used for the balconies façade, which have not worn well due to weather conditions and pollution.

The bear not only needed an operation to reattach its front paws, but also required aesthetic treatment to remove layers of dirt and material from previous restorations, such as Portland cement.

The layers of dirt were removed using a dry mechanical cleaning technique, which helped bring out the stone’s original colour without the use of chemicals. The Portland cement was replaced with mortar made of lime and sand to ensure the colour and composition were as similar to the original stone as possible. The paws were attached to the body using a resin-based technique. Lime and sand mortar was used to hide the scars as much as possible. 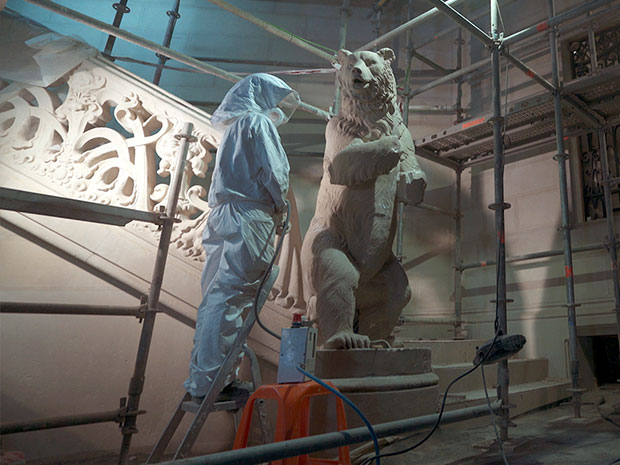 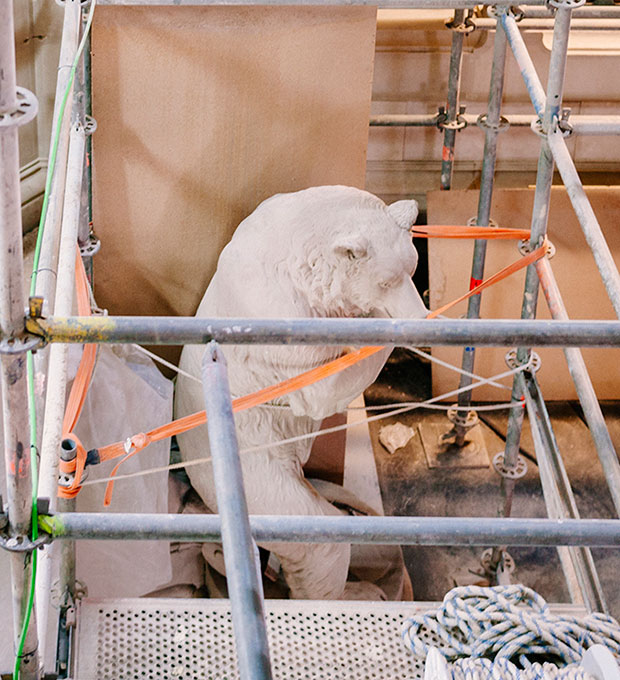 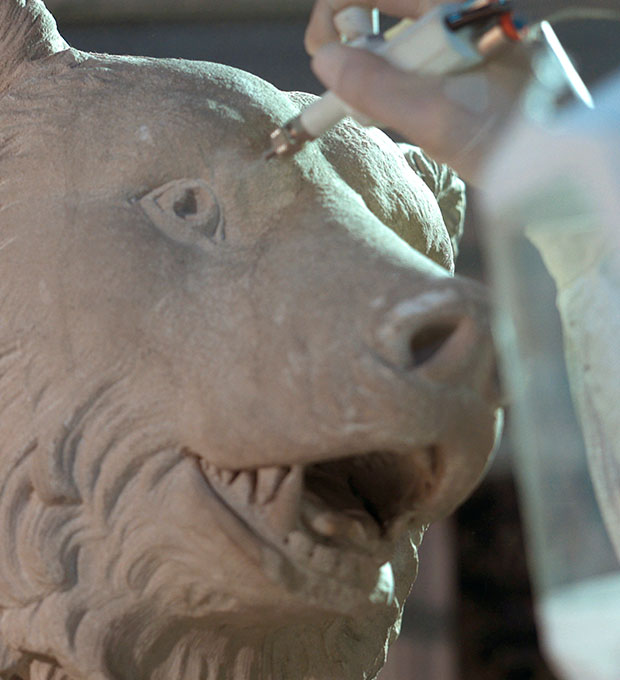 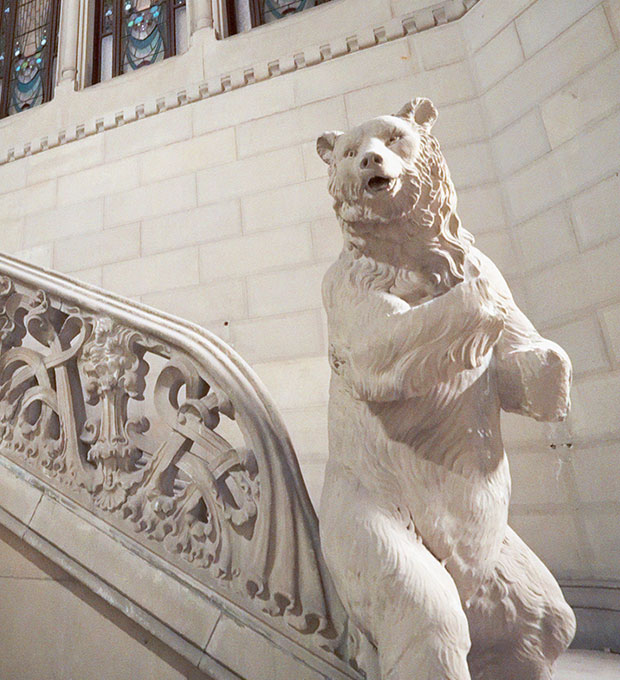 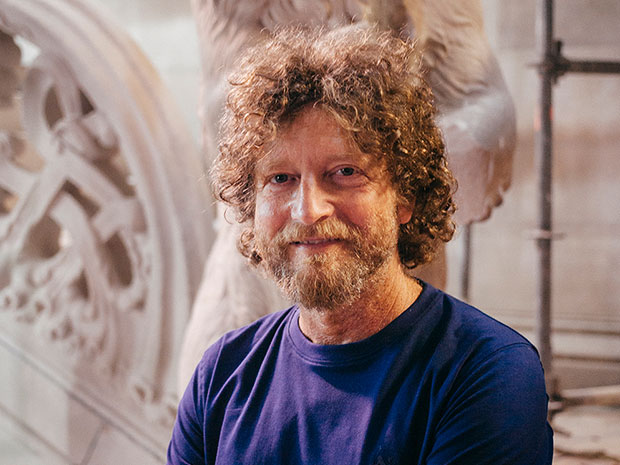 Rudi Ranesi is a sculptor born and educated in Italy who has lived in Catalonia for twenty years. After studying Fine Arts in Rome, he began to work as a restorer. He studied Art History and also completed a restoration course in Venice. Since 1997, he has lived in Barcelona, where his company restores pieces of Catalan cultural heritage.

Ranesi´s approach is characterised by on-site work, whether in archaeological excavations or on churches and historical buildings. He specialises in restoring mural paintings, mosaics and stone, and recently restored the doorway of Santa María monastery in Ripoll. Previously, he restored other Romanesque doorways, such as the one at Sant Pere de Galligants monastery and the medieval doorway in Gandesa.

He was involved in restoring Modernist elements in the former Hospital de la Santa Creu i Sant Pau and the Palau de la Música Catalana. Both buildings have been named World Heritage sites by UNESCO.